Last month, world champion rowing cox Erin Kennedy was proudly showing off her latest gold medal with her team-mates at the European para-rowing championship in Munich.

The tears that followed with her team, parents and friends were not just about the win for Great Britain: she was returning home to continue chemotherapy for breast cancer after her diagnosis in May.

Erin did not reveal the more gruelling details until speaking to Good Health. She is almost certainly facing a double mastectomy after Christmas due to a family history of the disease. Her paternal grandmother and two great-aunts had breast cancer, as did one of her father’s sisters.

Erin, 30, has undergone tests for the faulty BRCA1 and BRCA2 genes which give carriers an average 70 per cent chance of developing breast cancer, with the results due this week. 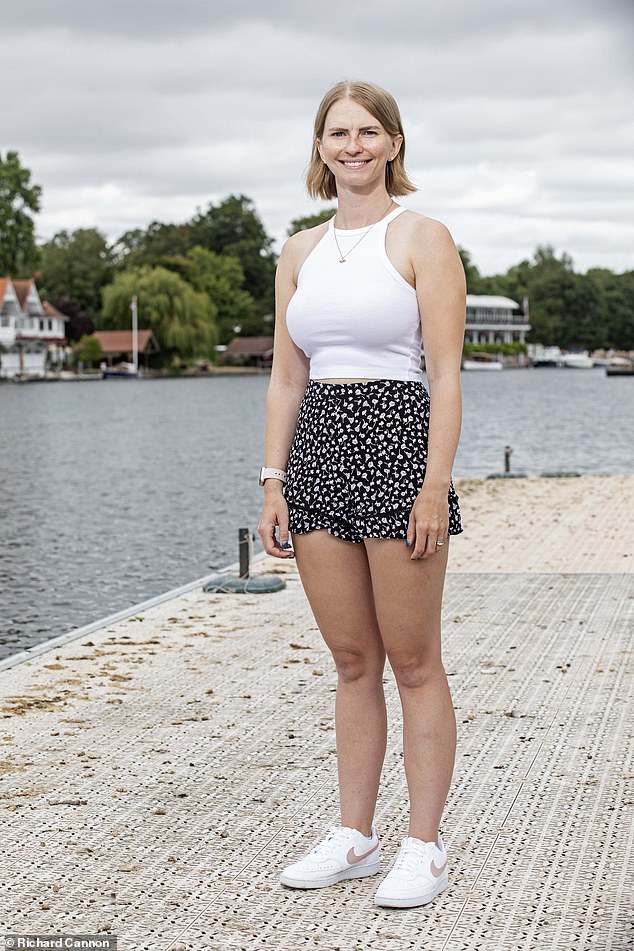 The tears that followed with her team, parents and friends were not just about the win for Great Britain: she was returning home to continue chemotherapy for breast cancer after her diagnosis in May

But even if she tests negative, Erin thinks she will have the radical surgery. ‘I want to be as confident as I can that I’ve done everything to prevent this happening again,’ she says.

When Erin was diagnosed, both her sisters, Katy, 32, and Molly, 26, also asked for genetic testing. ‘This is something that, as a family, we might all need to face and deal with,’ she says.

Erin, who married teenage sweetheart, Sam, 31, a major in the Royal Logistic Corps, in 2019, has also had to face the fact that chemotherapy could affect her chances of having children.

Which is why, on June 28, she was at Guy’s and St Thomas’ NHS Foundation Trust’s assisted conception unit in London being taught how to inject herself with fertility drugs every day for two weeks. She then had an operation to have her eggs harvested the day before her first chemotherapy session. Erin and Sam now have nine embryos ‘on ice’ in case she isn’t able to conceive naturally.

Erin has triple negative breast cancer, an aggressive form which has a greater risk of recurring within the first five years. However, those who are disease-free after five years are 97 per cent likely to remain so within ten years from diagnosis, and 95 per cent within 15 years.

Triple negative breast cancer accounts for 15 to 20 per cent of cases and is more common in women under 40 and black women.

Its name is derived from the fact that it is not triggered by the hormones oestrogen and progesterone, and it makes very little or no HER2, a protein that stimulates some breast cancers to grow. 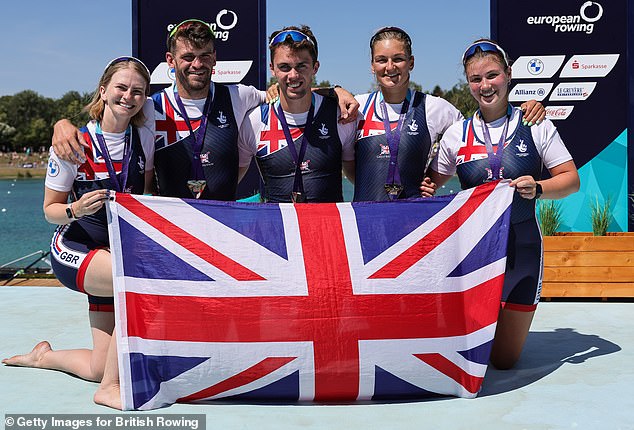 Last month, world champion rowing cox Erin Kennedy was proudly showing off her latest gold medal with her team-mates at the European para-rowing championship in Munich

Erin’s cancer was caught early and the prognosis is good. ‘I’ve been told they are treating to cure me,’ she says.

The other factor in Erin’s favour is her background as an athlete. Her maxim during treatment is: ‘Listen to my body and do what exercise I can every day.’

This is in line with a growing body of research showing that patients with cancer who exercise during treatment can mitigate the side-effects of surgery, radiotherapy and chemotherapy.

Regular exercise may also lower the chances of a recurrence and improve survival rates.

A key U.S. study, published in 2020 in the Journal of the National Cancer Institute, looked at patients’ exercise levels when they were diagnosed and two years after treatment.

The women who met U.S. guidelines (two-and-a-half to five hours a week of moderate-intensity physical activity, or one-and-a-quarter to two-and-a-half hours of vigorous-intensity aerobic activity a week) had a 55 per cent reduced chance of recurrence. They were also 68 per cent less likely to die from any cause, not just breast cancer, compared with those who didn’t meet exercise guidelines.

Those who hadn’t exercised before their diagnosis but had taken up this level of exercise by the time of their two-year follow-up still significantly reduced their risk of recurrence and death.

Even patients who regularly exercised at levels lower than the guideline amounts reduced their chance of recurrence by 19 per cent, and of death by 22 per cent.

Another study in 2015 in the Journal of Clinical Oncology found that women who exercised and were physically active while having chemotherapy experienced less nausea and pain and returned to work earlier.

As Neil Aaronson, a researcher in psychosocial oncology who led the study at the Netherlands Cancer Institute, explained: ‘In the past, patients who received chemotherapy were advised to take it slow, but actually it is better . . . to be as active as possible.’

He advised patients: ‘Think of exercise as an important part of your treatment plan.’

There are similar quality-of-life benefits for all types of cancer of any severity, according to a review published in 2009 in Current Sports Medicine Reports. This concluded that exercise was a promising therapy for side-effects of cancer treatment such as chronic fatigue, depression, sleeping problems and ‘brain fog’.

Liz O’Riordan, a former breast cancer surgeon who has had the disease, told Good Health: ‘We don’t yet know how it helps, but we know from these studies that exercise is highly beneficial to breast cancer patients and those who have other cancers.

‘Exercise should be the first drug for cancer patients. The problem is we’ve only had the evidence about how beneficial it is for side-effects and survival for the past five to ten years and a lot of doctors don’t have time to read the research or go to conferences,’ she says.

‘And we tend to under-prescribe, saying ‘go for a gentle walk’, when really you must get hot and sweaty and be unable to say a whole sentence, so you get your heart rate up. This means trying to do at least three 30-minute sessions of aerobic exercise — walking, gardening, Zumba dancing — a week,’ she suggests — both during and after treatment.

‘Just as important: do two 30-minute sessions of resistance or weight training. You don’t need a gym. Do lunges while brushing your teeth; push-ups against the kitchen counter. Exercise helped me cope with the side-effects.’

Erin says she’d be motivated to do exercise anyway — ‘but all the research and evidence makes it a no-brainer’.

Erin found a kidney bean-sized lump in her left breast while in the shower at a training camp in Italy earlier this year. The team’s doctor — Lady Redgrave, wife of former Olympic rower Sir Steve Redgrave — arranged for her to see a specialist.

Scans revealed Erin had a 2.6cm tumour. She is having neoadjuvant chemotherapy (‘neoadjuvant’ means it precedes another treatment) to shrink the tumour before surgery in early 2023. ‘I’ve been told that if I have the double mastectomy, reconstruction can be done at the same time,’ she says.

Before chemotherapy, Erin decided to cut her waist-length blonde hair short, donating it to the Little Princess Trust charity. She felt ‘it would be traumatic to lose such long hair and wanted to take control’.

She has since lost ‘a lot’ off the top and says she will ‘probably shave it off soon’, adding: ‘I’ll be getting a wig as I want to go out and not have people looking at me as if I’m ill.’

Erin, who has always trained with her crew for four-and-a-half hours a day, six days a week, has also reduced her fitness regimen.

‘I like to train next to my crew mates but they have been preparing for the World Championships in the Czech Republic taking place this week, so that’s been their goal, whereas I’m trying to be really healthy.’

She’s cut down from four to two gym sessions a week, and uses lighter weights. She still does three 40-minute cardio workouts, plus daily walks on top of that.

She feels the exercise is helping: she is upbeat and hadn’t suffered any nausea until her third cycle in late August, when she had ‘low-level nausea for the first time but without vomiting’. ‘I’m going to eat breakfast first in future,’ she says.

‘My greatest side-effect so far has been fatigue.’ Frustratingly, after Munich, her levels of neutrophils, a type of white blood cell, were too low — depleted by chemotherapy — so her third cycle of treatment had to be postponed for a week.

Even so, she’s recently been walking and cycling in France’s Loire Valley with Sam. ‘We cycled one-and-a-half hours to and from lunch one day! The longer it’s been since chemo, the more energy I have.’ She will have five more cycles of chemotherapy, finishing just before Christmas.

Erin says her approach to cancer ‘is not asking ‘Why me?’ but ‘What’s it for?’. ‘The answer to that is being open and helping others. I’m emotional and do have moments of fear and dread, especially after the diagnosis — times when I’ve felt vulnerable. But dying hasn’t gone through my mind. I’ve always had optimism, positivity and drive.

‘While I can’t do what I love for now, I’m still aiming for the Paris Olympics in 2024. I hope to encourage other patients to do exercise, to find their normal and to do what gives them energy.’

For more information about exercise go to breastcancernow.org and cancerresearchuk.org