The brown marmorated stink bug, which was introduced into the US from Asia in the mid-1990s, is spreading to more states as climate change increases temperatures across the nation.

Although harmless to humans, these small insects feast on nearly 170 plants including crops, putting the nation’s agriculture business at risk.

Some states, like Washington, are already taking action against the pest with a parasitoid insect called samurai wasp that lays its eggs inside stink bug eggs.

When the larva wasps hatch, they consume the stink bug eggs, thus stopping the population from growing. 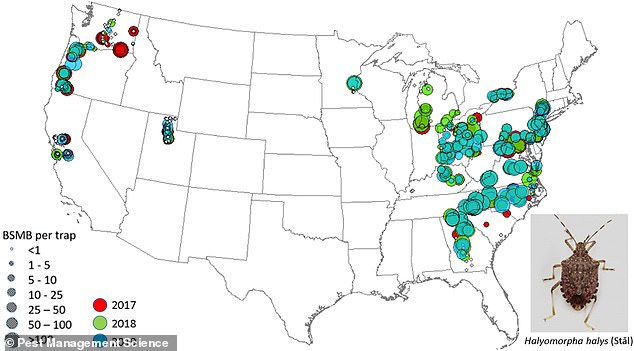 The study looked at locations of stink bugs over the course of three years. It found the bugs have made a shift north, which is likely due to climate change warming temperatures

Stink bugs likely stowed away on a shipping container set for the US and it has since settled in 46 states – 15 of them deem the bug a pest.

Though it is tiny (smaller than a fingernail), it sucks the juice — and life — out of fruit plants, invades people’s homes, attacks more than 100 plant species including raspberries, apples, pears, peaches and plums and is capable of destroying entire crops.

To add insult to injury, as it sucks and slurps, it often emits a smell best described as a ‘cross between stale farts, rotting rubbish and rancid almond’.

The insects dislike cold winters and have mainly stayed in the southern region, but as climate change warms various parts of the north, they are able to make a northward shift.

This was determined by researchers monitoring 534 sites where stink bugs thrive over the course of three years – from 2017 to 2019. 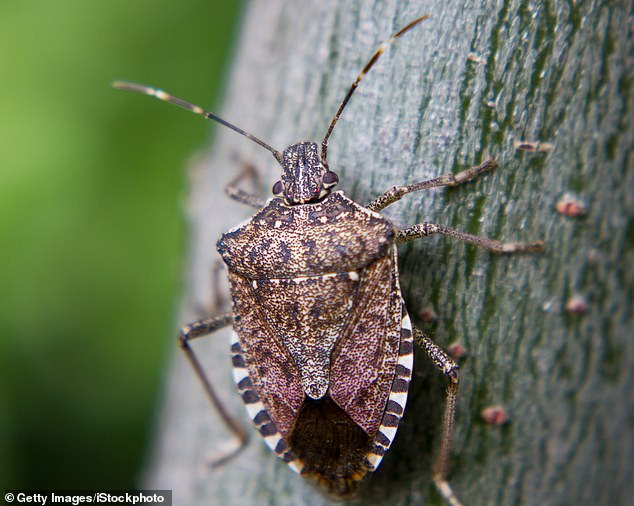 Though it is tiny (smaller than a fingernail), it sucks the juice — and life — out of fruit plants, invades people’s homes, attacks more than 100 plant species including raspberries, apples, pears, peaches and plums and is capable of destroying entire crops

Rarely were stink bugs found in the northern states, but as of 2019, the insects have settled as far north as Washington.

Regions that may be particularly affected include the Mid-Atlantic, areas surrounding the Great Lakes, and the valleys of the West Coast, such as the Sacramento Valley in California and the Treasure Valley in Idaho.

The team notes that because stink bugs take cover indoors during the winter, people are unknowingly helping them spread from state to state

Study lead author Javier Gutierrez Illan, a Washington State University entomologist, said in a statement: ‘Every system will change with climate change, so the fact that you can grow garbanzo beans, lentils or wheat without these pests now, doesn’t mean that you will not have them in a few years.

‘There are mitigating things that we can do, but it is wise to prepare for change.’

There are ways to keep these pests out of your home during the winter – one being to seal any cracks in your home’s framework,,. 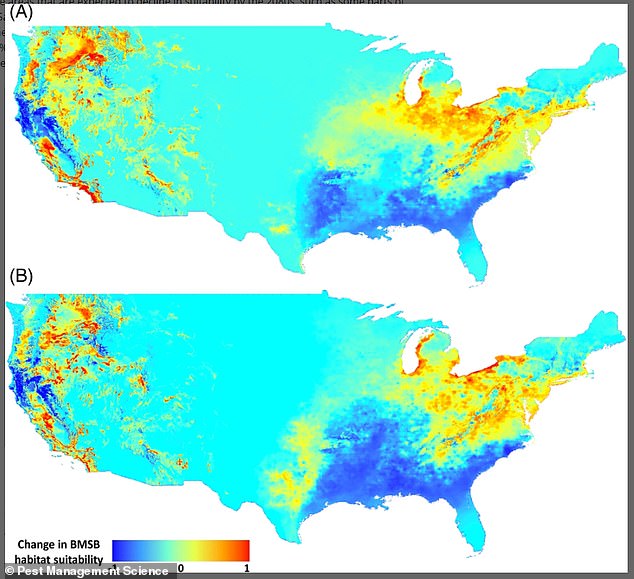 ‘It’s prudent to check the framework throughout your home and reseal where necessary with a robust silicone caulk sealant.’

Andrew also suggests spraying insecticides around the outside of your home.

‘Where feasible, it’s worth spraying a store-bought pesticide or insecticide solution around the outside of your home (particularly around windows and doors), which may provide some protection,’ he said.

‘At the same time, pull out any vegetation you see growing from the foundations or very close to the home’s exterior.’

And another way to keep stink bugs out of your home is to change outdoor lighting.

‘It’s also believed that stink bugs are somewhat attracted to light sources after dark, so it’s worth turning these down after the sun sets,’ said Andrew.