Drinking beer every night may lower your risk of dementia, scientists say.

Results showed people who drank the equivalent of two pints a day were a third less likely to get the memory-robbing condition than teetotalers.

Non-drinkers faced the highest threat, according to the results. They were roughly a fifth more likely to be struck down with dementia than the biggest boozers, who got through at least three pints a night.

The researchers said their findings show that abstaining from alcohol seems to carry no protective benefits against dementia.

However, experts noted that while moderate alcohol consumption may stave off the cruel disorder, excessive drinking is dangerous. 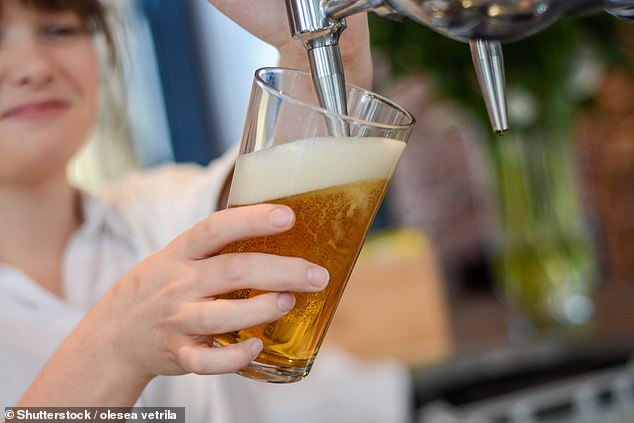 Australian researchers, who studied the drinking habits and dementia rates among 25,0000 over-60s, found two pints a day slashed the risk of the memory-robbing condition by a third

How much alcohol is too much?

To keep health risks from alcohol to a low level, the NHS advises men and women not to regularly drink more than 14 units a week.

A unit of alcohol is 8g or 10ml of pure alcohol, which is about:

But the NHS warns the risk to your health is increased by drinking any amount of alcohol on a regular basis.

People who drink as much as 14 units a week are advised to spread it evenly over three or more days, rather than binge drinking.

Women who are pregnant or trying to become pregnant are advised not to drink to reduce risks for the baby.

With global dementia rates set to triple over the next 30 years, Dr Louise Mewton and colleagues said it is ‘fundamental’ to scale back on the risky habits that could contribute to the rise.

Experts previously estimated that four in 10 dementia cases worldwide could be prevented or delayed if risk factors were eliminated.

Obesity is one of the biggest risk factors.

The team, from the University of New South Wales, gathered data from 15 old studies.

They contained data on the alcohol drinking habits and dementia rates of 24,478 over-60s.

For comparison, one pint of peer contains around 16 grams of ethanol, while a medium-sized glass of wine has around 18 grams).

None of the participants — who were followed for up to 40 years — had dementia at the start of the study.

Over the course of the study, 2,124 people were diagnosed with dementia, according to the findings, published in the journal Addiction.

When compared to teetotalers, occasional and light to moderate drinkers were 22 per cent less likely to develop the condition.

And those who consumed up to two-and-a-half pints a day had a 38 per cent reduced risk of being diagnosed compared to non-drinkers.

Even the biggest drinkers were 19 per cent less likely to be a dementia sufferer than those who didn’t consume alcohol.

When the researchers further crunched the numbers, drinking 40g of ethanol per day — the equivalent to five units — was linked with a lower risk of dementia compared to those who had never had a tipple.

Dr Mewton, a public health researcher, said abstaining from alcohol appears to be associated with a higher risk of being diagnosed with dementia.

Scientists say alcohol in moderate levels may reduce the the build-up of plaque in the brain, which is a telltale sign of the illness.

It could also boost levels of ‘good’ cholesterol, while antioxidant-rich red wine may protect the heart — which both in turn protect against dementia.

The researchers said their data was robust and shows the impact of alcohol drinking on dementia rates worldwide.

However, they noted that alcohol intake was self-reported by participants — who are prone to under-estimate their drinking.

And the type of alcohol consumed was not logged. Some studies have found that only certain drinks — such as wine — may protect against dementia.

Meanwhile, the data included few excessive alcohol drinkers, who are thought to be at most risk from dementia.

UK health chiefs advise Britons to drink no more than 14 units per week — around six pints of beer or 10 small glasses of wine.

Drinking large amounts of alcohol for many years raises the risk of high blood pressure, strokes, liver disease and some cancers, as well as dementia.

Dr Sara Imarisio, head of research at Alzheimer’s Research UK, said: ‘The results showed that people who never drank alcohol had a higher chance of developing dementia than those who did.

‘These results are consistent with previous research on this topic, which also show that heavy consumption of alcohol, as well as not drinking, seems linked to a higher risk of dementia.’

However, she noted that alcohol is toxic to brain cells, so excessive drinking over time can ‘change the way our brains works’, alter its shape and structure and stop the body absorbing vitamins properly.

Previous studies have highlighted that alcohol is a risk factor for dementia, due to the toxic effect of ethanol on the brain.

Studies have even shown that excessive drinking is one of the biggest contributors to dementia, more so than high blood pressure or diabetes.

However, research has also thrown up contrary results. Some papers show heavy drinking is not linked to the condition, while others found light to moderate drinkers have a lower risk than teetotalers.

The surge is predicted to continue — with experts estimating 152million will be suffering from the memory-robbing condition by 2050.

As it stands, around 900,000 people are thought to be living with dementia in the UK.

The figure is nearly seven times higher in the US, with 6.2million blighted by the memory-robbing condition.

There is no cure for the disease, meaning doctors can only prescribe drugs that lessen its symptoms.

WHAT IS DEMENTIA? THE KILLER DISEASE THAT ROBS SUFFERERS OF THEIR MEMORIES

Dementia is an umbrella term used to describe a range of progressive neurological disorders (those affecting the brain) which impact memory, thinking and behaviour.

There are many different types of dementia, of which Alzheimer’s disease is the most common.

Some people may have a combination of types of dementia.

Regardless of which type is diagnosed, each person will experience their dementia in their own unique way.

Dementia is a global concern but it is most often seen in wealthier countries, where people are likely to live into very old age.

HOW MANY PEOPLE ARE AFFECTED?

The Alzheimer’s Society reports there are more than 900,000 people living with dementia in the UK today. This is projected to rise to 1.6million by 2040.

Alzheimer’s disease is the most common type of dementia, affecting between 50 and 75 per cent of those diagnosed.

In the US, it’s estimated there are 6million Alzheimer’s sufferers. A similar percentage rise is expected in the coming years.

As a person’s age increases, so does the risk of them developing dementia.

Rates of diagnosis are improving but many people with dementia are thought to still be undiagnosed.

IS THERE A CURE?

Currently there is no cure for dementia.

But new drugs can slow down its progression and the earlier it is spotted the more effective treatments are.